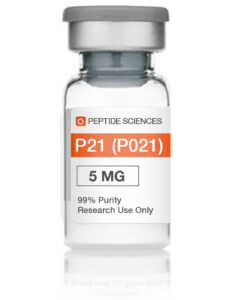 P21 Nootropic Peptide  is a research peptide from CNTF (Ciliary Neurotrophic Factor), a polypeptide hormone and a neurotrophic factor. It promotes neurotransmitter synthesis and neurogenesis (creation of neurons).

However, unlike natural CNTF, P21 is more stable and can cross the blood-brain barrier. The development of this P21 is through a process called epitope mapping, which uses antibodies to identify target binding sites.

P21 is from the most active region of CNTF (residues from amino acid section 148-151). Glycine-adamantyl was added to the C-terminus to increase the permeability of the blood-brain barrier and increase its stability.

P21 has several positive effects on the central nervous system. But its primary impact is on the dentate gyrus. Here it acts to enhance neurogenesis and neuronal maturation in the brain.

The dentate gyrus is in the hippocampal formation in the brain’s temporal lobe. It contributes to the generation of new episodic memories, and spontaneous learning occurs in new environments. In addition, it also plays a vital role in information processing.

Although P21 is similar to a CNTF mimetic, research in animal models shows that P21 does not bind directly to the CNTF receptor. Studies suggest that peptide P21 does not act strictly as an analog of CNTF. Instead, its action is more of an inhibitor of antibodies or other molecules that neutralize CNTF.

P21 has shown to be a promising treatment for specific neurological conditions, especially Alzheimer’s, a disease that causes memory loss, changes in mood, and impaired ability to move, among other symptoms.

In Alzheimer’s disease (AD), neurons and specific brain regions atrophy are lost. Before this damage, the brain’s natural reaction translates into increased activity in the dentate gyrus.

Unfortunately, aging and AD-affected brains cannot promote neurogenesis. Therefore, increased activity in the dentate gyrus does not lead to the creation of new neurons to replace neurons affected by the disease.

At this point, we can talk about P21 and its positive effects; this peptide increases the activity of the dentate gyrus so that it overcomes this limitation. It helps to change the balance of neurotrophic factors toward creating new neurons and neurogenesis.

Scientific research shows that the neurotrophic support by P21 leads to increased levels of Brain-Derived Neurotrophic Factor (BDNF) and neurotrophin-4. At the same time, you are decreasing the mitogenic effect of fibroblast growth factor 2 (FGF-2).

Interestingly, the administration of P21 before the onset of Alzheimer’s disease in animal models prevents the cognitive deterioration that usually occurs with this disease. Study results suggest that P21 could be even more important as a preventative than a potential treatment for Alzheimer’s disease.

Studies suggest that many drugs against Alzheimer’s do not work because they are prescribed too late when cognitive decline is very advanced.

The importance of Brain-Derived Neurotrophic Factor in Alzheimer’s

Brain-Derived Neurotrophic factors essentially increase the neurogenesis and downregulation of certain enzymes. It is responsible for the formation of tau and amyloid plaques in the brains of patients with Parkinson’s disease and Alzheimer’s.

Specifically, BDNF decreases the activity of the GSK3-beta protein, which catalyzes both amyloid-beta formation and tau protein phosphorylation, both of which cause the development of Alzheimer’s disease leading to inflammation and neurodegeneration.

It is worth noting that overproduction of GSK-3 beta shows in many disease processes, including type 2 diabetes, several forms of cancer, and bipolar disorder.

Knowing then that P21 can increase BDNF, it follows that limiting amyloid deposition in the brain may not be the only way to fight Alzheimer’s disease, which is one of the current treatments for AD.
Although plaque deposition begins early in Alzheimer’s disease, it is not until later in life that the effects of the deposition become apparent. The reason is the neurotrophic factor balance shifts away from neurogenesis.

Thus, combined with early detection through clinical biomarkers, P21 may offer the first real opportunity neuroscience has had to slow or even stop the progression of neurodegeneration.

A professor of neurochemistry at the New York State Institute for Basic Research explains:
“The problem in Alzheimer’s disease is an imbalance between neuronal death and neurogenesis.”

P21, the most potent nootropic peptide for neurogenesis

P21 shows promise as a treatment against neurodegeneration
The promising neurological effects of P21
There is hope that peptide P21 and other inhibitors of GSK3-beta may be helpful in the treatment of stroke, cancer, and especially bipolar disorder.

Synapsin I, an important protein for communication between neurons
GluR1 (AMPA receptor), a receptor that mediates fast transmission
NR1, a glutamate receptor associated with synaptic plasticity and learning

So, thanks to these effects, plus P21’s potential to promote neurogenesis, the researchers conclude that P21 may help restore cognitive function in diseased brains and stimulate this critical function in healthy brains.

Therefore, while research to confirm its full benefits must translate to animal models and future human trials, P21 already shows that it can be helpful as a nootropic and performance enhancer for cognitive tasks.

There is a myth in the world of nootropics that says that the peptide P21 is a derivative of Cerebrolysin, but the reality is very different.

As we have already said, P21 is a synthetic analog of the Ciliary Neurotrophic Factor, and this is only one of several components of Cerebrolysin. P21 has four amino acids from CNTF and an adamantane group added to improve the bioavailability and stability of the compound.

Therefore, P21 can best define as a synthetic and modified analog of one of the individual components of Cerebrolysin. Cerebrolysin in small amounts also provides essential cognitive benefits.

For cognitive decline, Cerebrolysin is an effective initial treatment. Unfortunately, this benefit diminishes over time by high levels of exogenous CNTF. It promotes the production of autoantibodies that backfire on the body if the medicine is used too often.

It is worth noting that P21 is more effective than Cerebrolysin in preventing cognitive decline in animal studies.

In fact, Cerebrolysin has pretty much been abandoned as a long-term treatment because it causes the production of autoantibodies against CNTF. Thus, eventually not only becomes ineffective, it actually makes things worse.

The reason that cerebrolysin is antigenic (antibody-generating) is that it is a purified porcine product. So, the human body regards it as a foreign agent and rejects it if used continuously.

However, these effects seem to diminish with each new cycle.

By comparison, the immediate effects of Peptide P21 are often not felt as strong as those of Cerebrolysin. However, its mid- and long-term effects are much more consistent.

P21 is a peptide of great interest. While it has currently only been tested in animal models, the potential in humans is very promising. There is potential treatment for cognitive impairment, and for its ability to strengthen cognition in healthy individuals.