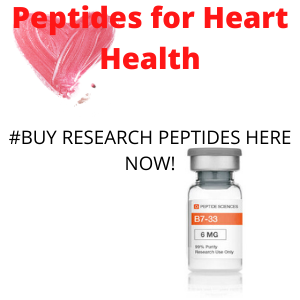 In the science community, there are always investigations being done to find cures for diseases. In this post, we delve into research peptides for heart health. Heart failure is one of the most common heart diseases. It develops on its own or often as a result of another heart condition. It is generally characterized by an insufficient flow of the heart pump. This is a result of the blood flow being disturbed and circulatory deficiency occurs in all organs and tissues in the body. The USA ranks among the top in treating cardiac diseases, including heart failure.

What is Heart Disease?

Heart disease is divided into acute and chronic. The second is most often with a progressive course. After its diagnosis, heart failure is subject to lifelong monitoring by specialists and requires serious and combined treatment. But what about all those who are suspected of having heart failure or are expected to develop it in the future? The diagnosis of this disease, like all other areas, is undergoing dynamic development. One of the tests is the study of natriuretic peptides. Structurally, these are hormones produced in response to high pressure and mechanical stress in the heart cavities, walls, and some blood vessels. They are highly sensitive to changes in blood volume and circulation. In clinical and scientific practice, the study of the following markers from this group is important.

Both atrial and cerebral peptides are synthesized in the heart muscle in a healthy heart and in the presence of heart failure. The difference comes from the place of production and of course the quantity. In general, natriuretic peptides regulate the retention and excretion of water and sodium, dilate blood vessels, affect other hormones that regulate blood pressure, affect the permanent metabolic changes of heart cells, and much more.

Leading importance is the so-called. BNP, as well as its inactive precursor fragment – NT-proBNP. Their study acts as a marker for heart failure. They play a leading role in the exclusion of acute heart failure. Although studies such as cardiac echocardiography are central to fine-grained diagnosis, natriuretic peptides may target or facilitate it. Their periodic monitoring helps to stage the disease and assess its progression. Their fall or rise also shows how effective the treatment is.

These markers are not specific to heart failure

Natriuretic peptides are not only for treating heart failure. They also react to inflammation of the heart, pulmonary embolism, cardiac arrhythmias, arterial hypertension. A number of diseases of the internal organs also increase their values. These are liver cirrhosis, endocrine disorders, anemia, severe infections. Acute or chronic renal failure slows the elimination of a number of enzymes and hormones from the body, including cardiac markers.

We have falsely high results in people who are underweight. The female sex is also a separate factor, increasing values. The same goes for the elderly. Accordingly, on the other hand, obesity leads to lower levels of NT-proBNP. Interpretation and evaluation of the results obtained is a difficult task in the presence of concomitant diseases that alter the values ​​of these peptides.

Apart from the shortcomings that follow from the non-specific increase in GNP, many positives can be deduced. For example, according to their value, cardiac is distinguished from other causes of deteriorating general condition in the so-called polymorbid patients. Their study would answer questions about the origin and outcome of the disease, etc. This, of course, is in the hands of experienced clinicians and is a matter of serious and controversial discussion.

The material is informative and cannot replace consultation with a doctor. Be sure to consult a doctor before starting treatment. Peptides are still in the research stages and studies continue to find new cures. At present, the research peptide B7-33 is showing positive results in improving heart health.