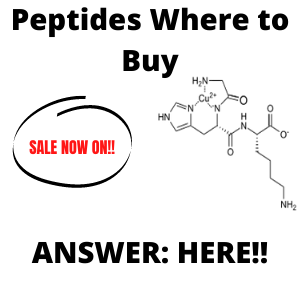 Peptides for WeightLoss: Losing excess weight is a goal for many people around the world in today’s modern society. But, as you probably know one of the toughest! Carrying too much weight poses a multitude of health problems from aches and pains to serious conditions such as diabetes, heart disease, and strokes. If we were to say there might one day be a peptide weight loss program, you probably would wonder what does that means. Well in this article we take a look at the research chemicals that are still being tested and in particular the group of peptides for weightloss. Are you interested then read on…

The peptide is a molecule created by the binding of two or more amino acids. In general, if the number of amino acids is less than fifty, these molecules are called peptides, whereas larger sequences are referred to as proteins. Hence, the peptides can be considered as small proteins, and are just strings of amino acids.

Peptides are present in each living cell and have different biochemical activities. Some peptides are synthesized into the ribosomes of the cell by translation of mRNAs into hormones and signaling molecules. Other peptides are assembled (shortly after synthesis) and become enzymes with a wide variety of functions. Peptides also form the structure of receptors that await the binding of hormones and signaling molecules. Peptides can be used by anyone, whether it is sports and fitness, women or men, young or old. Peptides have a beneficial and positive effect on many functions in the body.

· Increase libido and many other positive functions

GHRP or growth hormone-releasing peptides can be used alone to increase natural growth hormone (GH). Through pulses in the pituitary gland in the brain, it releases somatotropin. GHRP will increase the release of growth hormone significantly.

How Peptides for Weight Loss Work

Peptides for weightloss have hormonal activity. They increase access to extra energy sources, the fatty acids, which makes them, divide and release the energy needed for physical activity. It also acts on certain substances, so they, in turn, stimulate the hypothalamus and pituitary gland. This positively affects the quality of the adrenaline produced. And as you know, adrenaline increases fat breakdown and the end result is fat loss!

There are different types of GHRP peptides: GHRP-6, GHRP-2, and Ipamorelin. The differences between them are efficacy and side effects. The GHRP-6 is very powerful and greatly enhances appetite. GHRP-2 is strong and can slightly affect sleep. Experts have discovered in studies that the peptide Ipamorelin fat loss results are the most effective and have the least side effects of all GHRPs. For more about peptides read this Wikki link here:

How Peptides are used

All peptides can be used alone and mixed. The substances are available in vials varying in amounts measured in milligrams, consisting of a solid lyophilized substance. The peptides are dosed using a regular 1 ml insulin syringe with a needle similar to those used for insulin. They are injected subcutaneously (under the skin into adipose tissue); most commonly in the abdomen. The required amount (saturation dose) is 1 microgram per 1 kg of body weight. Usually, 0.1mg is used for easier and more convenient measurement. Lower doses will lead to less GH release, which is due to the slightly weaker GH pulses and will reduce side effects. A higher dose will have minimal benefit and is often a waste of money. However, more frequent doses on a given day would lead to more frequent impulses and consequently a greater release of growth hormone.

The lyophilized product in the vial is mixed (dissolved) with bacteriostatic water (BW). The idea is not to dilute the substance much. It is common to add 0.5 ml of BW in 1 mg of a peptide. The vial should be reconstituted with 1 ml. BW, 5 mg. with 2.5 ml. 10 mg. with 5 ml. etc. Bacteriostatic water is not injected directly into the vial but is lowered in the inner wall of the vial in a smooth and controlled manner. Avoiding stirring the mixture too much it will dissolve and become clearer. You can rotate the vial in a gentle rotating motion to dissolve it, but do not shake it.

The prepared peptide should be refrigerated to prevent its breakdown. Left at room temperature, the peptide will break down within a day, but if stored in the refrigerator it should last for a month.

Doses can be taken throughout the day, but not less than 3 hours between injections. Injecting 1 dose a day can give a rejuvenating effect, deeper sleep, and a better quality of life. It is most effective to take the dose immediately before going to bed. Sleep is the time when our pituitary gland is most active. It is often taken 2 or 3 times a day to provide muscle growth and fat loss, depending on the diet and exercise plan. Doses should be taken on an empty stomach to be most effective.

As you can see the experts who have discovered peptides have tested many dosage examples to be effective in losing weight. But, it is important to understand why we gain weight. In general, the human body wants to process fat and save that fat to use for the activity. But, due to today’s diet being high in processed sugar or glucose and carbohydrates it is more or less impossible! This combination of sugar is stored and floods the body causing fat to be easily hoarded and not used up in energy. This makes losing weight a hard task. But peptides are considered a way out of this predicament and are able to get weight under control.

While both men and women both gain weight, it is usually women that always seem to be continually on a diet. There are many dieting fads out there promising results, but in reality, most do not work. It takes control and willpower to lose weight, and keep it off. That is probably why scientists created peptides for weight loss to help combat the ever-growing problem of weight gain.

Patients who have been prescribed peptides for weight loss often use peptides with HGH or human growth hormone. These hormones act as neurotransmitters and send strong signals to the brain to alter that person’s behavior. The natural growth hormone declines as we age, so this is a reason many people gain weight as they get older. The HGH peptide helps regulate the metabolism and helps get the body’s system in control and also control weight gain. The best peptides for weight loss are:

As with all chemicals, there are often some minor problems that they can cause. The most common side effects logged to date are; Dry mouth, high blood pressure, increased appetite, joint pain, kidney pain, tingling, and irritation from the injection and water retention.

Peptides are certainly an advantage for people who have problems losing weight. But as we come to the end of this article it is important to know there is no magic cure for losing weight. Experts will always advise any medication to be used alongside a controlled diet and exercise plan. Though peptides for weight loss may help reduce weight, they work better with regular exercise and a healthy diet. But, remember they are only a temporary boost. You have to completely change your eating habits and improve your lifestyle with more exercise to lose weight and stop it from returning! That for many people is the hardest.

The Benefits of losing weight

To summarize make losing weight your new journey! Get motivated and buy a dairy or spreadsheet and log your results. Have a goal. Maybe you want to get into some trendy swimwear or stylish jeans, whatever it is don’t lose that focus! Change your eating habits to healthier alternatives. Drink plenty of water, cut down on alcohol and sugar. Get moving, small differences will make a difference. You don’t have to cut out treats completely, but make them a special treat. The more weight you lose the better you will feel and look. The more exercise you do the more energetic you will feel. Don’t lose that dream. If you really need that boost to ask your doctor about peptides for weightloss or alternative treatments. They may be better than surgery if the weight problem goes too far!